⚡️Get an extra 10% discount on all orders with coupon ‘justbraap!10’ during checkout! 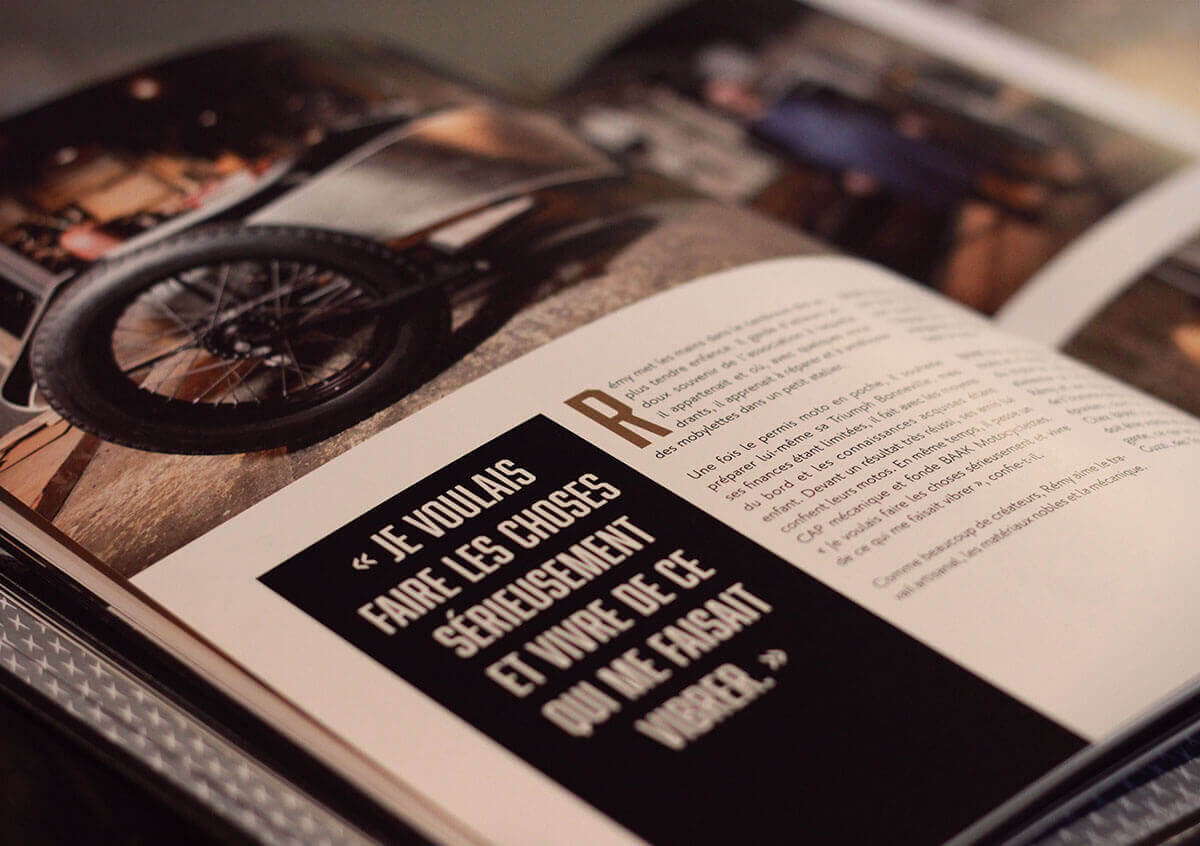 I’ve selected 8 cafe racer books to inspire, both for builders as dreamers. As a style of custom motorcycle, the Café Racer has enjoyed an amazing resurgence in recent years. As part of our “creative generation” and the need the distinguish ourselves, the custom motorcycle has been enthusiastically embraced all over the world. But the first wave of bikers to stretch out across long tanks to low bars were the rockers of the 1950s and 60’s Great Britain. These, were the motorcycle riding, disenfranchised post-war youths, the real-life Johnnies, and Chinos. Rebels with a cause and that cause was to tear through England’s grimy streets leaving nothing behind but cigarette butts and the smell of burnt oil. A few weeks ago I’ve posted a list of general motorcycle books, now I’ve put together a list of cafe racer books that tell the story of the old days and are useful for inspiration when building your own cafe racer (or just for dreamers like me).

Ace Café Then and Now

Along with the Busy Bee on the Watford Bypass and the Dugout in Golders Green, the Ace Café was one of the three main p

it stops. Here you could find the original ton-up boys of the golden era of café racers.

This book recalls the original Ace, a greasy spoon truck stop that turned into one of the most famous motorcycle hangouts in the world. The story of its rise, fall, and subsequent phoenix-like rise from the ashes is told in great detail. A fascinating read, backed-up with atmospheric photos from the various eras.

Today, the Ace flourishes once more and its importance as a motorcycle focal point has never been greater. The cover notes say that this, is the ‘story of the boys that raced and the policemen that chased’. And if you leave the Ace and walk the short distance to the edge of the North Circular, on a moonless summer’s night you might just hear the faint sound of a pre-unit Bonnie being caned for all its worth. [view on Amazon]

How to Build a Café Racer

This book has received a few damning reviews, mostly regarding the fact that it appears to deal primarily with café racers from an American perspective. But this is the exact reason why I’ve included it.

Mitchel is a journalist, photographer and motorcycle enthusiast with over 20 publications to his name, most of them motorcycle related. And due to the current popularity of café racers in the US, this book is probably enjoying a resurgence of sales.

With the brief history lesson out of the way, the book takes on the various stages of converting a stock bike into an archetypal café racer. Chapters cover topics such as planning and choosing an appropriate donor bike, to modifications on shocks, tires and engines.

The center pages carry a nice collection of photos of finished bikes ranging from Triumphs and Nortons to Hondas and Ducatis. Whilst the final chapters cover two complete beginning to end builds undertaken by custom bike shops. These show how the pros do it, combining practical functionality with mega cool looks. [view on Amazon]

And if you’re still at the choosing stage for your project, you might also want to check out his Standard Catalog of Japanese Motorcycles 1959-2007 for donor bike ideas. [view on Amazon]

A great, easy going book full of authentic first-hand tales simply told by the people of the time. Set in the early 1960’s it recounts the lives of teenage bikers. Looking at the daring, dodgy, and sometimes dangerous exploits that made-up their daily life on two wheels.

As lighthearted as it is, it can almost be viewed as a historical document that chronicles the whole Mods and Rockers era. Recounting life as it unfolds amongst the council estates and cafes of South London.

Specifically dealing with the years 1960-6 it conveys a more innocent and unruly time. At this time a spotty 16-year-old could legally ride any of the powerful 650cc superbikes of the day – as long as the bike had an L plate on it of course.

These were the days of head-down 100mph street races along midnight roads and the start of the legendary bank holiday seaside runs. Accompanied by atmospheric black and white photos of the day, it’s a real slice of British rocker life fuelled by Castrol GTX and frothy coffee. [view on Amazon]

This is Uli Cloesen’s eighth motorcycle book and was influenced by his 2015 trip from New Zealand to the Isle of Man TT races. Roughly mapped out in alphabetical order, the book deals entirely with café racer styled British bikes.

The book gripped me from the first page. Opening with AJS, the very first photograph was one of my all-time favorites, the archetypal factory built café racer, the AJS 7R.

Interestingly, although the book covers a lot of the old hybrids such as the ubiquitous Triton it shows Cloesen’s love of the genre. The book includes such exotica as the Noriel (Norton framed Ariel square four).

At face value, the title is a nice pictorial stroll down memory lane. However, it also serves to focus attention on the fact that British motorcycle manufacturers of the 40s, 50’s and 60’s produced factory built café racers. Bikes that were to become the template for virtually everything built today in this style. [view on Amazon]

The year is 1964, the Great Train Robbers are on trial, the Beatles are at No1 and the average wage in Great Britain is £16 a week. And on the Easter weekend of the 30th March two groups meet on Clacton Beach and make history.

This is probably the only book that deals in depth with the volatile phenomenon that was the Mods and Rockers. The violence that ensued between the two factions gripped the nation with terror and the authorities could no longer ignore the nationwide tension between them.

With the help of 50 rare photographs, Brown recounts how the telltale signs had been missed by the police, politicians and the media. Only to be discovered too late. Going on to explain how both sides emerged, developed and eventually split, their legacy still proving significant today. [view on Amazon]

Cafe Racer: The Motorcycle: Featherbeds, clip-ons, rear-sets and the making of a ton-up boy

Mike Seate takes his readers through the social scene where the scene emerged, how it developed and which notable people were involved. Based on decent research, well written and easy to read (and understand). Supported with great photos from both old and new cafe racers which inspire builders and dreamers. [view on Amazon]

How to Rebuild and Restore Classic Japanese Motorcycles

There are many base bikes for cafe racers, and the original cafe racers used to be built upon British machines, but with the rise of the high performing Japanese brands, the latter became a popular base for cafe racers. This book by Sid Young may look to be aimed at rebuilding and restoring, but if you’re using an older motorcycle, you need a lot of information on how to perform technical tasks to get the bike back on the road again.

It’s a thorough and very comprehensive guide that covers all of the mechanical systems of classic Japanese motorcycles. Containing over 450 color images and illustrations, data tables and a handy index to help you save a lot of time and money on your cafe racer build. [view on Amazon]

The Build: How the Masters Design Custom Motorcycles

I’ve already listed this one in my general motorcycle book overview, but The Build by Robert Hoekman jr is an absolute must-have inspirational book for both builders and dreamers. Often used as eye-catching item on coffee tables, but in fact, it’s much, much more than that.

A must have (and read!) for those who want to build a motorcycle. Or just fly on this review:

If you like to know more about the cafe racer scene, need inspiration on your (next) build or just want to give one an original gift, these are the cafe racer books to buy. Do you think that I’ve missed one here? Feel free to post your comments below!

Leave a Reply Cancel reply
BRAAP: A Way of Life

BRAAP isn’t just a brand, it’s a way of life. While it’s origin may be in the MX world, we’ve taken BRAAP to a wider perspective. With a passion for both dirt bikes and classic cafe racers, we think that BRAAP just might be perfect for those two worlds.

Offered in the country of usage